Scalp Micropigmentation is a revolutionary treatment for people looking to hide the appearance of scars on the scalp. Whether you’ve received a scar from an injury, surgery or hair transplant procedure, here at Defined Edge we have the technique to reduce the appearance or even camouflage the scar into the hairline, smaller scars can also be left, adding more of a real finish to your SMP treatment. All of this can be discussed at your initial consultation.

Alopecia Areata (AA) is understood to be an autoimmune condition. The immune system which normally protects the body from foreign invaders, such as viruses and bacteria, mistakenly attacks the hair follicles. This is what leads to hair loss. Alopecia Areata can typically start as one or more small patches on the scalp. The hair loss can remain patchy or can continue until all hair on the scalp is lost (Alopecia Totalis or AT). There is currently no known cure for alopecia. It can affect all ethnic groups and ages and occurs equally in both men and women. SMP is a great modern way of concealing Alopecia areata. 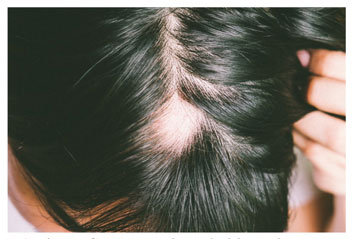 An estimated eight million women in the UK have hair loss. Research has found one in eight of those surveyed were under 35. It is believed that the prevalence of hair loss to women is actually higher than this and that women often suffer in silence. Women can often resort to spending a huge amount of money on commercially marketed treatments that can be largely ineffective. The effects of hair loss can have a great effect on a woman’s self-confidence.

There are various reasons for female hair loss, they can range from a vitamin deficiency, sudden weight loss or over-styling, hormonal imbalance and physical or emotional stress.

There are two widely known female hair loss density scales used by most hair loss specialists: the Ludwig Scale and the Savin Scale. They are identical except that the Savin Scale also measures overall thinning. 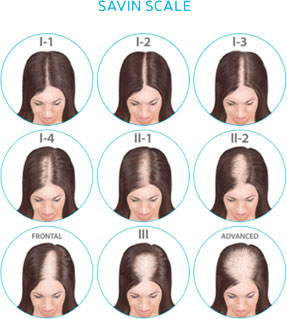 Male pattern baldness refers to a loss of hair on the scalp in men. It happens as hormone levels change over a man’s lifetime, and especially in the later years. This process can begin at any age. About two thirds of men are either bald or have a balding pattern by the age of 60. The Norwood Scale is the leading classification system used to measure the extent of male pattern baldness. Men typically lose their hair in one of several common patterns over the course of many decades. 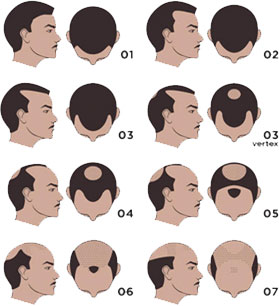 Occasionally we are asked about our scalp micropigmentation treatment and if it can be applied to facial stubble hair. The answer is yes, this can be to create the illusion of a 5 o’clock shadow. Clients have chosen this treatment when suffering with Alopecia and thinning beards or moustaches.

Vitiligo is a long-term condition where pale white patches develop on the skin. It’s caused by the lack of melanin, which is the pigment in skin. Vitiligo can affect any area of skin, but it commonly happens on the face, neck and hands, and in skin creases. Please feel free to enquire.

Thinning hair refers to minor to moderate hair loss. Unlike widespread hair loss, thinning hair doesn’t necessarily cause baldness. It does, however, give the appearance of thinner spots of hair on your head. Give us a call today and see how we can help you.